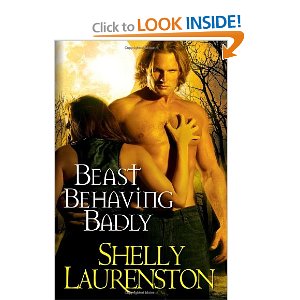 This is the 5th installment in the “Pride Series” by Shelly Laurenston; it’s the story of Blayne and Bo. Blayne is a perky wolf-dog plumber slash derby girl whose spirited and friendly demeanor endears loyal friendships with hybrid and pureblood shifters. Bo, a bear-cat hockey star with a “my puck” attitude and regimented routine is immediately attracted to Blayne. After Blayne determines that Bo is not a serial killer, despite his cold stares and harsh off ice personality; she makes him one of her “projects” and finds out that their is more to the bear-cat than his obsession with organization and Bo finds out that Blayne is not the sweet innocent that her male friends try to protect.

The Good: Blayne is a departure for Laurenston, I have read eight of her books and I found this sheroine to be different than the others. Blayne is perky, friendly, and energetic, unlike most of her herione’s who tend to be offbeat and a little mean spirited (like me),  but I like her nonetheless. I kind of want to be her, is that weird? Yes, it is. But, I enjoyed the way she viewed the world and the fact that by the end of the book Bo understood her crazy and some of the other characters had adopted her upbeat view. Whole she different, she was also similar; Blayne is absolutely shameless in getting what she wants as are many of Laurentson’s characters; she cries, uses her big brown puppy dog eyes, left hooks, shoots people in the ear, and blackmails her way through the book, saving the helpless and showing Bo that she can be perky and dangerous all at the same time. OMG, the book was also the book is hilarious, Blayne singing the Rocky anthem, or chasing her tail, and Lock’s reaction to Ric’s “hysteria;” my husband looked at me when I rolled around laughing. Ms. Laurenton is genius, crazy good lines that will make you crack up

The bad: There was not a lot of poetic chemistry between these two; opposites attract, but Bo had no personality or interests and Blayne had personality and other interests. I also wasn’t sure about a few of the love scene’s, they were scarce and not descriptive enough, though, “hhhmmm, that feels bigger than it looked” was the perfect amount of description.

I'm just saying: I read many reviews before I wrote this and a lot of the comments regarding the book cover and what could be perceived as Blayne’s  immaturity, as well as “race” within the book. I’d like to address all three; I too was a little upset with the cover of this book, Blayne is African-American and Bo is half Asian-American, neither of the models on the cover represent the minorities of the book. Was I angry? Not really. Never judge a book by it’s cover. Immature? No, I thought that Blayne just had a different view of the world; she knew who she was and what she wanted, but she felt that she needed the world around her to see her as non-threatening, so she used charm, humor and their own thick-headedness against them. For example, Ric sending Dee-Ann to shadow Blayne without telling her what was going on; Blayne figured it out and instead of freaking out she played along, got free protection and annoyed the crap out of sourpuss Dee-Ann at her and Gwen’s amusement. Finally, the thing about “race” is, no matter what year it is or what kind of president we have race will play an issue, even to those of us who claim to be colorblind. Personally I like the fact that the race of the characters was only described once or twice, it means that their personalities took precedence over their features in their descriptions. I feel like this is an important stance that this writer has taken; color isn’t as important as who we are as individuals and she makes this clear by only mentioning skin color once or twice in most of her books. I have to be honest it burns me up when authors write stereotypes instead of characters or they leave minorities out all together; to give breath and voice to characters without focusing on skin tone or societies reaction to an inter-race couple takes guts, I applaud Ms. Laurenston for that.

Overall; I liked this book enough to read it three times. I highlighted and noted several scene’s and paragraphs and will prbably go back whenever I need a laugh. I would definitely recommend this to other paranormal romance, romance, or fiction lovers, it’s a good story with action, comedy, hot sex, and seriously hot characters.