A romantic at heart, Violette Dubrinsky enjoys creating intricate situations and placing entertaining characters into them.  She is currently a full time graduate student and part-time writer. She enjoys creating stories with strong heroines and the leading heroes who "tame" them...and by tame, she means, learns to accept their stubborn, unchangeable ways. Violette is currently working on the sequel to The Masseuse, sequel(s) to Taken By Moonlight, sequel(s) to Warrior, and a host of standalone stories.

BD: What kind of atmosphere do you write in?


VD: I am such a loner. I think many writers to some extent which is what allows us to get into our heads and make things up. To write, I have to be in a space where I can access my bathroom, my kitchen, the TV, etc. so that's basically my bedroom. I love just sitting at my desk , on my laptop (like I am now) hacking away at the keyboard until my eyes burn, my head starts hurting and I start writing gibberish. That's when I know it's time to sleep.

BD: Details are divine, how do you keep track of them?

VD: I reread the story so many times to keep updated on the details. Because I don't get to do continuous writes as my Muse (be absorbed in thought)works on too many things at once, I'm always taking time to reread the story, see if something is in line or out of line with the character or the situation. If you constantly reread the story as you're working on it, you start to notice things...like the fact that you didn't describe what the heroine was wearing, whether that was even important.


BD: Which one of your books would you like to become a movie?


BD: Who is the book boyfriend of your life (Your charcter or someone else's)

VD: Right now, my book boyfriend is Ramsey Stone from The Masseuse. He's been commandeering all of my time and refusing to let me focus on my ex-boyfriends, Conall Athelwulf and Leon Arnaud. So, yep Ramsey's the one...for now. I honestly don't mind though, not when I'm picturing his character as the handsome Daniel Henney.


VD: The hardest character I've ever written... well, that a tough question. To some extent, they're a difficult to write because you to have to keep track of their characteristics and it's easy to lose sight of that if you have a lot of characters in one story and if the story is novel sized. I'd probably have to say of my published 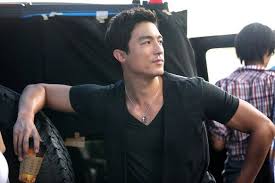 stories, Ramsey Stone (again) because his character is incredibly complex. The man you meet in The Masseuse starts out with certain characteristics and by the end of the story, readers realize that he's something else. In the sequel, which I'm writing now (you remember that the story that takes up all of my time lately making him my book boyfriend) he changes yet again to deal with different circumstances. Ramsey is incredibly layered but despite having these different traits, there has to be a core element that is distinctly Ramsey and that is what makes him such a fun challenge to write.

Read more of this fabulous author on her goodreads page, Amazon, or her personal page!
Posted by Unknown at 9:11 PM